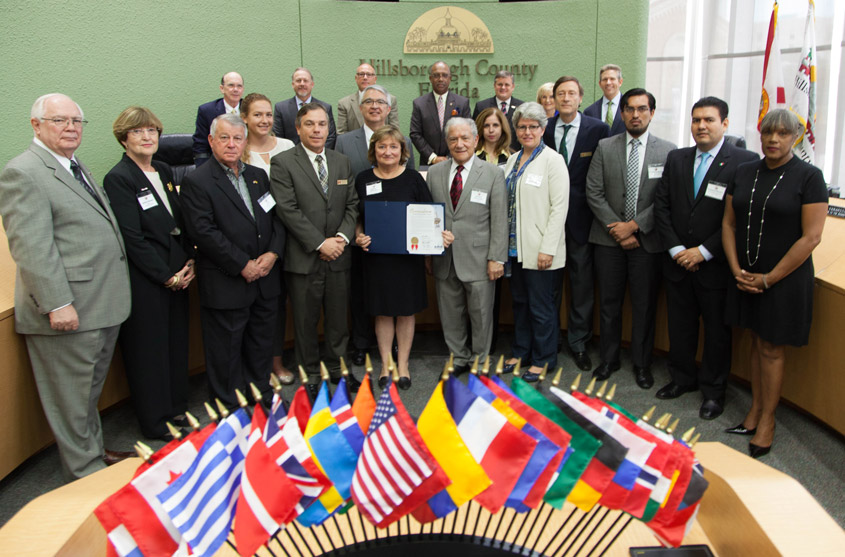 Members of the Tampa Bay Consular Corps can help a foreign resident navigate complex visa rules or arrange every last detail for an important meeting involving international business. They have had little experience, however, with the inner workings of Hillsborough County government.

On May 18, 2016, a dozen Consular Corps members spent five hours at the County Center taking a crash course in local government, making new contacts and learning about everything from traffic management to voter registration. Their visit came at the invitation of County Commissioner Al Higginbotham, who has long advocated for expanding and deepening the County's international relationships.

That made the Consular Corps a natural fit. Corps members are appointed by their country's Head of State or foreign minister, and each country establishes its consulate with the approval of the U.S. State Department. The Consular Corps of Tampa Bay has about 24 career and honorary consuls, and like all Consular Corps, its mission is to promote the art and culture of their countries, host diplomatic and business delegations, and generally help citizens of their countries who are in the United States.

The day began with the ceremonial - a reception and then an appearance before the Board of County Commissioners to receive a commendation - but quickly moved into the nitty-gritty of how County government works.

The group toured the Transportation Control Room, where a bank of 24 screens show in real time how smoothly traffic is - or isn't - flowing. Transportation officials told the group the data is mostly used to identify trouble spots so traffic engineers can devise solutions.

The agenda also included a presentation by Hillsborough County Supervisor of Elections Craig Latimer, who outlined the ways his office is working to increase voter turnout and make elections run smoothly. Much of the questions from Consul members centered around steps the Elections Office takes to prevent voter fraud.

Consul members got a peek at what goes on behind the camera during a stop at the production studios of Hillsborough TV, or HTV. Taping a short video of each Consul member introducing themselves in their native country's language took a good half hour for what eventually probably will be two minutes of screen time.

The day wrapped up with comments by Higginbotham and County Administrator Mike Merrill, and presentations by the Sheriff's Office, Public Defender's Office, State Attorney's Office, and Circuit Court Judge Samantha Ward. Most of the questions and discussion by Consular Corp members centered around recent changes in the law regarding the death penalty.

José Vivero, who holds dual citizenship in the United States and Spain and who was appointed to his position by the Secretary of State of Spain, said the visit showed group members how the County works, and helped acquaint the county with the Consular Corps.

"It was nice to participate with government officials and let them see the countries and cultures that exist in the Tampa Bay area,'' Vivero said.

Higginbotham said the day's activities were modeled after a get-to-know-the-County tour originally given to children. The tour was tweaked and tailored to grownups after county officials noticed how impressed the kids' adult chaperones were with the tour.

"Today, they got special insight into how County agencies work,'' Higginbotham said of the Consular Corps' visit.