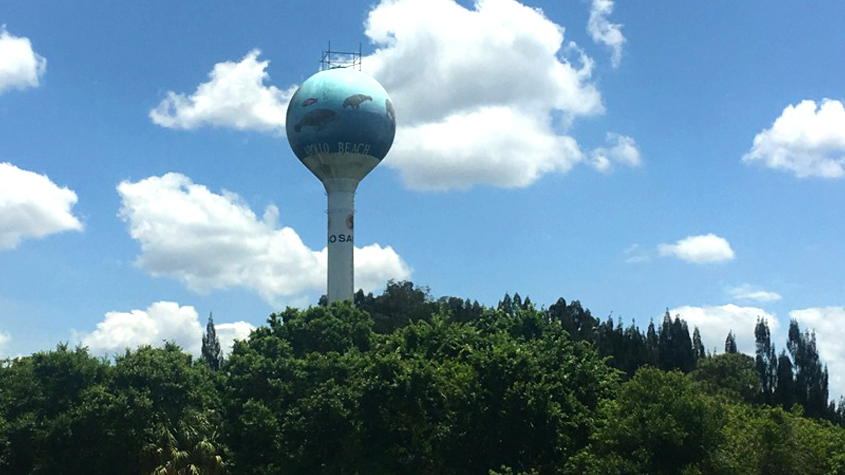 In various forms, the Apollo Beach water tower has greeted residents and visitors since the early 1960s.

For the last decade or so it has featured a mural depicting manatees, dolphins, a fish, and a ray. But the painted seascape is fading and the structure, though basically sound, needs work.

Led by Ruskin artist Mike Parker, the waterfront/golfing community is re-imagining its iconic publicly-owned tower. A makeover is slated for completion by the end of 2017, funded by the Hillsborough County Board of County Commissioners through its Public Art program.

At a series of community gatherings this summer, residents will discuss visual possibilities. Generally, there are two camps: people who want to freshen up the existing seascape, and those determined to consider something new.

It's important for community residents to be involved, Parker says. After all, it's "art that everybody's going to look at every day."

"Let's not haphazardly create something kitschy or whimsical," he says. "South Hillsborough County is growing exponentially. Let's look ahead and create art with the idea that we're welcoming a brand new community."

Parker and others appreciate working on a structure that was erected to serve a functional purpose. "It's not a canvas," the artist says. "It's an object, in and of itself."

A site advisory committee, working with Parker, will send potential mural designs to the Public Art Committee in July. The Committee will select one of the ideas, and the County will hire a contractor to pressure wash the tower and apply the artwork.

The tower, which stands just east of U.S. 41, was built by Chicago Bridge and Iron Co. in 1960. It hasn't held water for years. The 128-foot structure once was painted to look like a golf ball on a tee. At another time it simply was adorned with "Apollo Beach." In 2006, a telecommunications company hired an artist to paint the seascape mural in exchange for permission to install a cellphone antenna.

The tower is one of Apollo Beach's most recognizable features. It still serves a practical purpose, Parker notes, helping people find the fast-growing community.

Parker, president of the South Shore Arts Council, has shepherded other mural projects in Hillsborough County. Among his community-inspired creations are "American Journey," a block-long depiction of Ybor City's heritage on corrugated steel buildings along Adamo Drive in Tampa; "Leaders Row," portraits of highly-regarded men and women from Tampa's Central Avenue neighborhood at Perry Harvey Park; and "Head, Heart and Hands," a display of Ruskin pioneers and historic places on a wall at Thriftway Plaza.