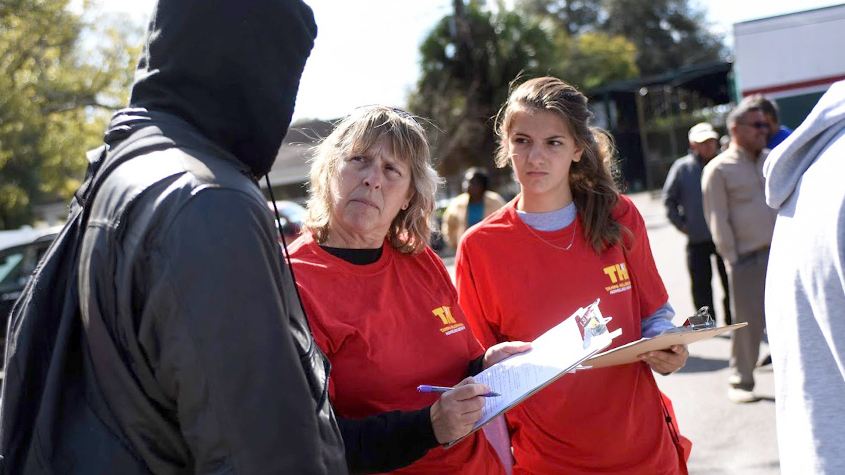 An annual one-day count of homeless people in Hillsborough County has rendered positive results, highlighted by a 26 percent drop in the number of people living on the streets.

The Hillsborough County Board of County Commissioners is reviewing results of the February 2017 effort by 330 volunteers to measure local homelessness. This year's outcomes reflect an initiative by the County's Homeless Services department and its partner agencies to implement the "Housing First" and "Rapid-Rehousing" models, where homeless individuals and families receive resources to transition to permanent housing.

These strategies are based on statistics showing people with a home are more likely to be productive members of society. Help them find a home, the theory goes, then address other needs or issues.

The "Point in Time" count is mandated by U.S. Department of Housing and Urban Development. Tampa Hillsborough Homeless Initiative (THHI), supported by Homeless Services, leads the effort to get a snapshot of the county's homeless population.

Andrea Bradwell is among those who have benefitted from the Rapid-Rehousing program to help homeless people find permanent housing. Andrea became homeless after her employer cut jobs, including her sales position, and her unemployment compensation ran out.

Without a job or money for necessities, she lived with a friend, in motels, in her car, and at a shelter. DACCO, a local agency that receives funds from the County, stepped in and helped Andrea qualify for an apartment. She found a job at a call center, and has lived in her apartment for about two months.

She credits determination, and DACCO, for her success in overcoming homelessness. "I just needed a little bit of help," she says. "That's all that I needed."

Andrea's experience has changed her view of homeless people. Previously, when she encountered panhandlers, she thought, "Why don't they just get a job?" Indeed, some people are lazy, she says. But many more people lack the resources or ability to get back on their feet. "Everybody's story is different," she says.

Point in Time volunteers counted 1,549 homeless people in Hillsborough County this year, including people living in shelters or on the street. That's 15 percent less than the number tallied in 2016.