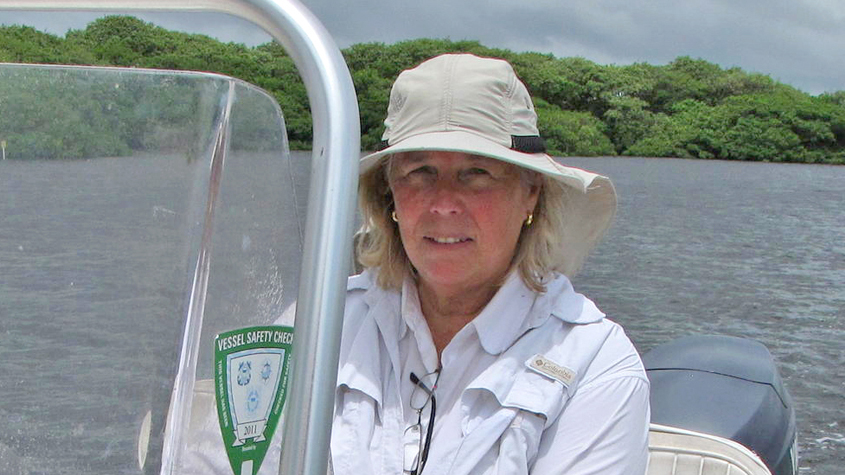 Paul protects birds and their habitats on islands and in estuaries stretching from Citrus to Charlotte counties, including those in Hillsborough County and elsewhere along Tampa Bay's shoreline. The region she oversees has the largest bird population in Florida, besides the Everglades.

An article in the National Audubon Society's magazine called her "the wading birds' best human friend." Among Paul's duties: She conducts nesting surveys, marks bird colonies, manages habitats, and educates the public about the critical importance of protecting birds and their surroundings.

The award presented by the Hillsborough County Board of County Commissioners recognizes a person or group dedicated to preserving the county's natural resources.

"This is more of an award for all of the people I've worked with over the years," Paul says. "I have really been a collaborator, a partner, and a cheerleader."

It's the second year County Commissioners have bestowed the Roosevelt Award. The inaugural recipient, Joe Guidry, an editorial writer at the former Tampa Times and Tampa Tribune newspapers, championed the environment in many opinion pieces.

The award's namesake, the United States' 26th president, was known for his conservation efforts. President Roosevelt placed more than 200 million acres under public protection, and doubled the number of sites in the National Park System.

Recipients of Award may designate $2,000 worth of improvement projects to a natural area of their choice. Paul plans to designate hers for the Fred and Idah Schultz Nature Preserve, along Tampa Bay's east coast, near Gibsonton. Formerly a dump site for material dredged from the bay, the restored 134 acres and nearby islands provide habitat for birds and other wildlife. It is overseen by Hillsborough County Conservation & Environmental Lands Management.

Paul says her efforts are not solely for birds. What's important for them - clean air, clean water - also is vital for the well-being of people. "We all benefit," she says.