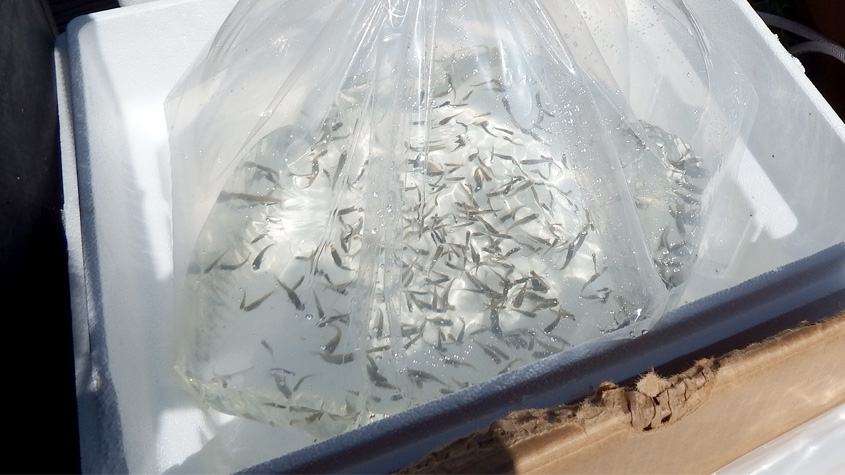 The laboratory, an arm of University of Florida/IFAS Extension, distributes the tiny fish to people hoping to control mosquitoes that lay eggs in birdbaths, shallow pools, pet bowls, and other standing water. Mosquito fish eat the insects' larvae, eliminating the bothersome and sometimes disease-bearing pests before they hatch.

Free mosquito fish will be available beginning May 30 from 10 a.m. to noon on Wednesdays at the lab, 1408 24th St. S.E., in Ruskin. It's a combined effort of Extension and Hillsborough County Mosquito Management.

The lab is an unlikely ally. Mosquito fish, after all, are enemies of many species of tropical fish. The aggressive, 2-inch-long mosquito fish attack, kill, and eat tropical species such as glofish and tetras, which are among the crops nurtured at Hillsborough County's prolific and lucrative tropical fish farms.

Ninety-five percent of tropical fish raised in the United States come from Florida, and more than half of that harvest hails from Hillsborough County.

Outside of commercial ponds filled with prized tropical fish, however, native mosquito fish serve a useful purpose in addition to their insect-eating propensity. Mosquito fish help prevent the unintended spread of non-native tropical fish into ditches, ponds, and other local waters by eating the wayward specimens.

For such purposes, the Tropical Aquaculture Lab is a strong supporter of mosquito fish. The fish's recent popularity also is drawing attention to the lab's work and Hillsborough County's fish-farming industry, both of which have been rather obscure.

The lab opened at its Ruskin location, a former National Weather Service outpost, in 1996. Technicians and veterinarians diagnose and treat tropical fish illnesses, conduct nutrition tests, experiment with marketable fish varieties, and look for a food fish that farmers can raise in Florida. The lab also leads or assists with marine-life efforts such as developing a protocol to determine the health of coral, and bolstering harvests of saltwater shellfish.

The Tropical Aquaculture Lab isn't the only beneficiary of the renewed interest in using fish to manage mosquitoes. David Drawdy's Oak Ridge Fish Hatchery in Plant City supplies Mosquito Control with the fish it gives to the public. David says mosquito fish now are in demand, but have been around for years. Farmers, for example, use them in cattle troughs to control the biting insects. "It definitely beats chemicals," he says. "I guess you'd call it going green."

The Ruskin lab works with fish farmers like David, and other commercial and governmental aquaculture ventures. Other than its new role as a distributor of mosquito fish, the lab does not interact directly with the general public.

Photo information: Mosquito fish are distributed free on Wednesdays at the Tropical Aquaculture Lab in Ruskin.