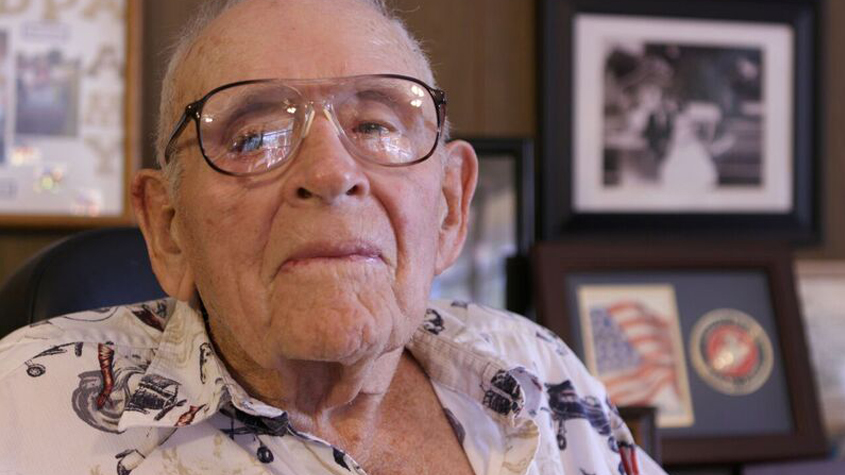 "We Saved the World"

Ray Chambers still sees Mount Suribachi as it appeared on the horizon from his U.S. Navy ship, before he trudged ashore on Iwo Jima.

More than seven decades later, the former 2nd-class motor machinist remembers crashing waves, loose volcanic sand, and the mountain looming over the landscape, with thousands of enemy soldiers entrenched beneath its stony surface.

"They called it the Beach Party," Ray says. "I don't know why. It was no party."

On his third day on the island, hours before the famous Iwo Jima flag-raising, Ray was shot in the leg. Medics patched the wound, and he returned to duty.

Taking control of Iwo Jima was a critical Allied goal in World War II's Pacific Theater. Ray, now 92 and a longtime Gibsonton resident, was on the island for 18 days. After the Allies captured Iwo Jima, his ship, the USS Talladega, went to Okinawa and then the Philippines, where Ray was among those preparing to invade Japan. Then the United States dropped two atomic bombs, precluding an invasion and ending the war.

After Japan surrendered, the Talladega, with Ray aboard, made several trips between the South Pacific and California, ferrying military personnel home to the United States. Ray left the Navy in 1946 and returned to his hometown of Detroit, where he worked as a mechanic for Greyhound and ran the service department at a Buick dealership before joining his uncle on the carnival circuit.

That's where he met his wife, Mary, whose family also worked for carnivals. They married following a brief courtship, and moved to Gibsonton a short time later. Now married 59 years, the couple still lives in the house Ray built in the late 1950s for about $10,000.

With the Gibsonton home as their base, the couple traveled the continent, mostly the Eastern Seaboard, staging carnival acts including a glass house and a monkey raceway. "Most people thought the monkeys drove the racecars," Ray says. "They didn't. We controlled them from behind a wall."

Ray and Mary still operate an ice cream concession at the Florida Strawberry Festival in Plant City and the Pasco County Fair in Dade City.

Ray is proud of his three-year Navy stint, and of his distinction as a member of The Greatest Generation. "We saved the world," he says.