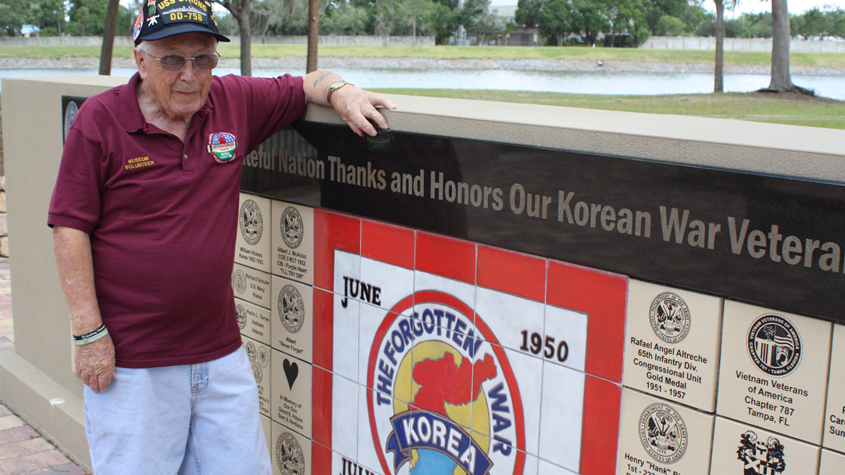 Fighting for the Very Foundation of Freedom

A teenage moment of summer boredom turned into a life-changing event for Marty Sullivan.

Sullivan had just completed his sophomore year at East Boston High School in 1951 when he and two friends hitchhiked to a U.S. Marines recruitment center to sign up for the Korean War. Turned down for being too short, he went next door to the Navy's recruiting center, where he was deemed 7 pounds too light. Undeterred, he put on the weight he needed to go to boot camp.

The Korean War began on June 25, 1950, when soldiers from the North Korean People's Army poured across the 38th parallel, the boundary between the Soviet-backed Democratic People's Republic of Korea to the north and the pro-Western Republic of Korea to the south. By July, American troops had entered the war on South Korea's behalf, fighting not just soldiers but the very forces of Communism itself. Hostilities ceased in July 1953, and the peninsula still remains divided.

As a fire control technician, the young man who had dropped out of high school worked a highly technical job, supporting the gunners by controlling range-finding gear, and solving ballistics calculations to control the firing of the guns. The USS Strong (DD-758), an Allen M. Sumner-class destroyer, carried six Mark 12 5-inch/38 caliber guns, and he remembers their details to this day.

If there's one advantage to being on a ship, it's that the shots aimed at killing you are at least generally coming from farther away, Sullivan said. If there's a disadvantage, it's having to navigate through floating minefields disguised in heaving seas. And then there are those nasty typhoons.

"We had our share of combat, mostly knocking out railroad lines and trains," he recalled. "It didn't matter what they were carrying, they were the enemy."

After a three-year tour, and four more years in the reserves, civilian life beckoned.

He worked in the Boston shipyards, then at the Green Shoe Manufacturing Co. and Gillette factories. Sullivan met his wife, Alice, on a blind date, and they raised sons Martin and Patrick. Retirement and the lure of warmer winters opened a new chapter. The couple came down to Seffner to visit Alice's two brothers, and bought a home in a Valrico active senior community. Sullivan joined the local chapter of the Korean War Veterans, volunteered with the Sheriff's Office S.A.L.T. (Seniors and Law Enforcement Together) Council, and learned how to live on his own again when Alice died of cancer in 2002.

A member of the Veterans Council of Hillsborough County, he is an avid volunteer at the Hillsborough County Veterans Memorial Park and Rear Admiral LeRoy Collins, Jr. Veterans Museum. He oversees the the park's Korean War Memorial, which was dedicated on July 26, 2014. The memorial features a granite edifice with a map of Korea and the names of Hillsborough County military personnel who perished during the war. Other plaques feature memories and photos of soldiers - including a young Marty Sullivan, smiling in a sailor's uniform.