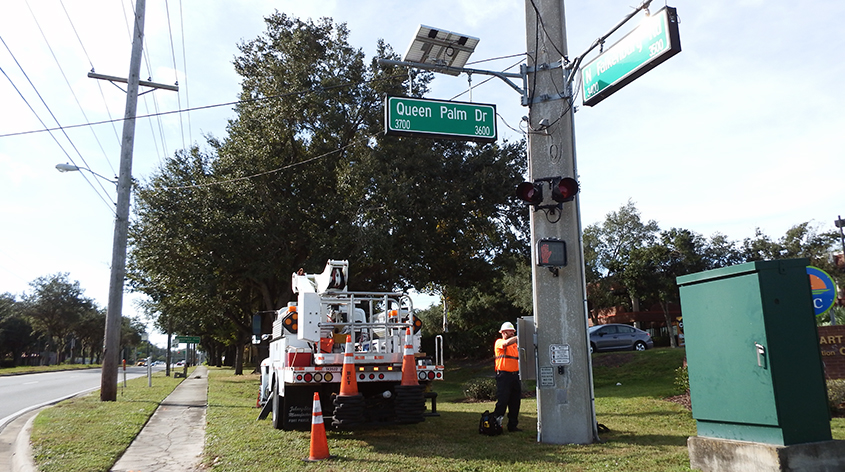 Hillsborough County has embarked on a multi-year project to retrofit more than 300 intersections with solar-powered emergency beacons to provide traffic control during extended power outages, such as those experienced after Hurricane Irma. The beacons would activate immediately upon complete power loss of the traffic signals, be in operation much quicker than crews could be deployed to install temporary signage, and operate until power was restored - all with no human intervention needed.

Hillsborough County was spared widespread damage when Hurricane Irma glanced the area in September 2017. However, wind gusts caused extensive power failures, which cascaded throughout the county and affected 125 signalized intersections. Traffic signals have universal battery backup systems that provide temporary power during short-term outages but the batteries deplete within six to eight hours. After the storm passed, residents and responders were traveling through areas without traffic signals before adequate traffic control signage could manually be put in place.

The power outages at the intersections following Hurricane Irma were resolved within five days, but Hillsborough County started planning for the possibility that future storms could result in darkened intersections for longer periods. A redundancy solution was needed that would execute automatically and instantly over the entire county. The solution also needed to be created from equipment that was generally available, easily serviceable, and would be universally recognized by drivers.

After researching and testing various options, it was finally decided to implement a completely unique system of solar-powered emergency beacons to augment the manual installation of temporary traffic signs. While this type of emergency beacon system has never been used anywhere else, the individual pieces of equipment are already used in traffic installations throughout Hillsborough County. For example, the solar panels are the same as the 550 panels powering school zone signals throughout the county, all of which were undamaged by Hurricane Irma.

The emergency beacons consist of single-indication, flashing LED beacons installed at the mid-point of the existing traffic signal pole uprights, aligned for each approaching direction. Solar panels installed at the top of the uprights charge the batteries for the beacons. The beacons remain unlit in normal operation but are wired to automatically replicate the intersection's flashing red or yellow pattern if the traffic signals lose power and the universal battery system is exhausted. Materials and installation for the beacons cost roughly $10,000 for each intersection, and will be tested and serviced annually during the routine preventative maintenance for each intersection.

The first fully operational beacon system was installed in October 2018 at the intersection of Falkenburg Road and Queen Palm Drive in the Sabal Park area. Beacons are scheduled to be installed at 40 additional intersections on emergency routes and high volume traffic corridors by October 2019. Installations at all 316 county-owned and maintained intersections are planned to be completed by the end of 2020. The emergency beacons are also being incorporated into future intersection designs.