Hillsborough County's Public Art Program helps to display the regions' cultural and artistic diversity by providing art in buildings across the County. As part of that diversity, the program proudly showcases African-American artists celebrating the community's culture and history. This self-guided tour takes you to several places where these pieces by African-Americans are currently on display in County buildings.

1. West Tampa Library (2312 W. Union St.)
In the main reading room of the West Tampa library you'll stumble upon Kaleidoscope, a series of stained glass windows by Synthia Saint James. A renowned artist, author, and architectural designer, Saint James' stained glass windows are accompanied in this library by an acrylic painting of the same design. Saint James is best known for designing the first Kwanzaa stamp for the United States Postal Service in 1997.

Appreciate abstract art with Tower Series by Sam Gilliam in the Robert W. Saunders, Sr. Library. Recognized as the foremost contemporary African-American Color Field Painter, Gilliam is most well-known for his painted canvases draped from walls and ceilings. His works can also be found all over the world, including the Smithsonian Institution, Tate Modern in London, and the City of Paris Museum of Modern Art.

Walk around the library and you'll also find work by Princess Smith, a local artist who has gained recognition as an up-and-coming artist in the Tampa Bay area (more on Smith later). Her collection, Champions for Change, includes 9 oil-finger painted canvas featuring a selection of influential civil rights activists in Hillsborough County. These activists include:

The Jackson Rooming House is portrayed by Dean Mitchell in a watercolor painting on display at this library. Mitchell, who was raised in Florida, is known primarily for watercolor and oil paintings. He derives much of his inspiration from African-American culture.

You'll also find another painting, Finger Painting - Miah, by Princess Smith. Smith was born in Los Angeles and later moved to Tampa Bay and earned her Bachelor of Arts from the University of Tampa. In 2013, she was named the Emerging Artist of the Year at the Raymond James Gasparilla Festival of The Arts. Smith lives in Tampa and plans to attain her Masters in Fine Arts from the University of South Florida. 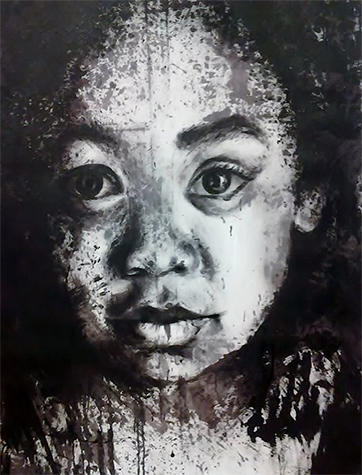 Finally, take a stroll into the lobby of Lee Davis Community Resource Center and you can't help but notice the James Vann wall to ceiling painting Getting it Together. But, that's not all. Directly upstairs you'll find another Vann work, Church Picnic. Named Artist of the Year by the Greater Brandon Arts Council in 2011, you'll find some of Vann's other works outside the Tampa Police Department's headquarters in East Tampa.