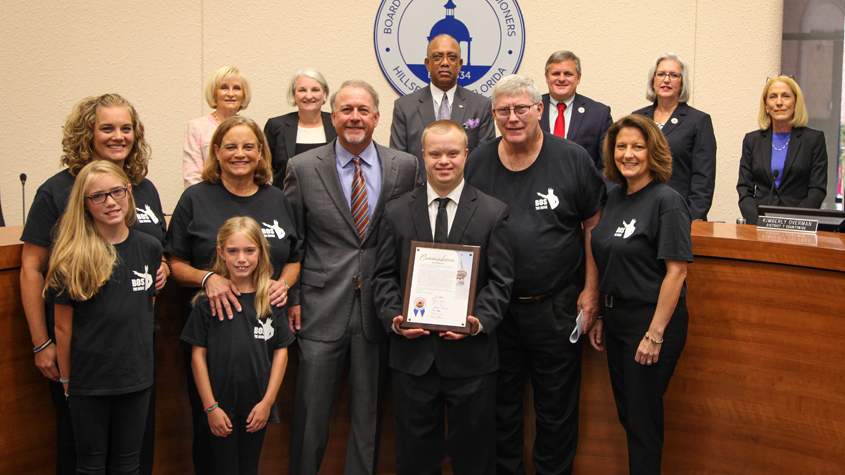 Sam Piazza is a man of many talents. While attending Gaither High School, he was manager of the boys' basketball team, president of the school's Best Buddies chapter, and crowned homecoming king in 2009. He worked in the United Way's promotional campaign, earned a Black Belt in Karate, and competed in the Special Olympics. Additionally, the Tampa native has been commended by the Hillsborough County Sheriff's Office for serving as an adviser on the needs of people with disabilities, and he works as a team member at PDQ.

Piazza, who has Down syndrome, has overcome numerous obstacles, never allowing his disability to hinder his determination to make his dreams come true and serve the community. His story inspired the new documentary film "Because of Sam," which highlights the anniversary of the Americans with Disabilities Act.

The Board of County Commissioners recognized Piazza for his accomplishments during its July 17 meeting, and the young man expressed his appreciation after accepting his commendation.

"I just wanted to say thank you," he said. "And I want to thank the commissioners and my family for being there for me."

The Board of County Commissioners also presented commendations to seven radio stations for helping connect residents to vital County programs and resources through their programming. Additionally, the Board presented two proclamations declaring July 24 through July 26 as Minority Enterprise Development Days and July as Parks and Recreation Month in Hillsborough County.