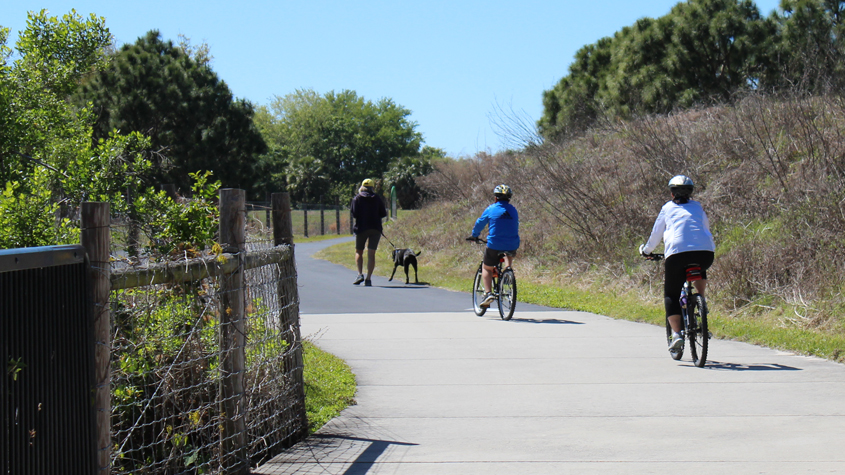 There are many trails in Hillsborough County. But most were designed primarily for recreation and exercise, not as transportation options.

A shared-use path the County is building beside a college campus, homes, and a conservation area in Ruskin is part of a network of sidewalks, bicycle lanes, and trails that will connect to the South Coast Greenway, designed to provide options for people seeking to get from place to place.

Public Works considers all types of mobility, from riding in a motorized vehicle to pedaling a bicycle to walking, when providing ways for people to move around the County.

The Ruskin trail gap, now in its design phase, is part of this new approach. The paved path will stretch 1.2 miles, from Shell Point Road to 19th Avenue, providing access to surrounding neighborhoods and Hillsborough Community College's SouthShore Campus.

Dr. Jennifer China, president of HCC SouthShore, says it's a great project. "The growth and development occurring in South Hillsborough County over the past year has been phenomenal," she says. "While the Ruskin Trail … is still in its design phase, the campus welcomes the addition."

The trail will provide access to the east side of the campus, and lead to destinations on 19th Avenue and Shell Point Road such as neighborhoods, businesses, schools, parks, and possibly a transit station. Including design and construction, the trail is expected to cost $2.1 million. It will be 12 feet wide and have a footbridge, a shade shelter, benches, bicycle racks, and landscaping.

Eventually, the County wants to connect the trail to other pedestrian/bicycle pathways. The County recently received a $450,000 grant from Florida's Department of Transportation to study inclusion of a trail as part of the proposed widening of 19th Avenue, between U.S. 41 and U.S. 301. Both shared-use trails would be part of the South Coast Greenway that links to a countywide, interconnected system of bicycle and pedestrian facilities. These paths, in turn, would align with a statewide network of trails for alternative, non-motorized modes of transportation.

In Hillsborough County, more than 150 miles of trails ultimately will complement traditional roadways. A few such pathways, conceived as recreational trails, already are helping residents get from place to place. Among them: Upper Tampa Bay Trail, Tampa Bypass Canal Trail, and Old Fort King Trail, and others.

Photo: Paved paths such as Upper Tampa Bay Trail now are considered transit options, as well as places for recreation and exercise.