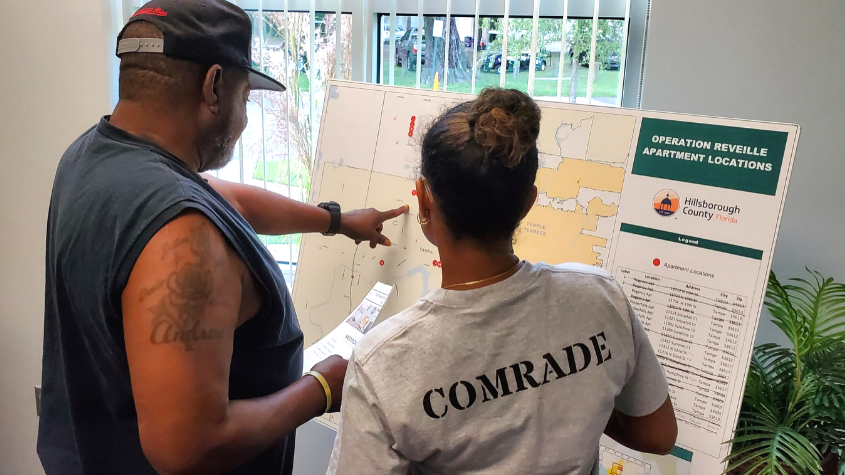 Helping a Few Who've Served All

More than 15 homeless veterans with many different backgrounds began their Veteran's Day stepping off a Sunshine Line bus at Veterans Memorial Park unsure of where the day would lead them. One veteran had suffered from debilitating anxiety, another had turned to drugs, and another had suffered severe health issues. But all these veterans had two things in common: they all had served their Country, and they all were living on the streets of Hillsborough County…until Operation: REVEILLE.

Operation: REVEILLE, a partnership spearheaded by the Tampa Hillsborough Homeless Initiative (THHI) and Hillsborough County Homeless Services, connects veterans experiencing homelessness with ready-to-move-in apartments on Veteran's Day. Veterans selected for Operation: REVEILLE are identified through community partners and must be actively working on a path to self-sufficiency through various case management programming.

"We house the most vulnerable homeless veterans in our community through Operation: REVEILLE. We have so many community partners that come together to help our Veterans and provide wrap-around services so they are able to continue to stabilize their lives," said Antoinette Hayes-Triplett, CEO of THHI. "They served and protected us, now we need to serve and protect them."

Andrew Morrow, who served in the U.S. Army 82nd Airborne and was severely injured in basic training years ago, was one of the Veterans selected to receive housing during the event's fifth year.

"I wish all of my Veteran brothers and sisters got an apartment. No one should wake up not knowing what they are going to eat that day, where they will sleep, where you're going to get medical help, or if you will be a victim of some crime," said Mr. Morrow.

Mr. Morrow found himself homeless after suffering multiple heart attacks that led to an extended stay in the hospital. When he returned home, he found he had been kicked out of his apartment and his belongings strewn along the sidewalk. Though he had family close, he didn't want to burden them with caring for him and took to the streets. Mr. Morrow ended up at New Beginnings, a transitional housing and homeless recovery program, for help. He worked with New Beginnings to get back on track and a few months later, he received keys to a new apartment.

"I thank God for being here today. Some people look at it as something to go through; I look at it as a blessing," said Mr. Morrow.

And what Mr. Morrow is most excited about with this new beginning: "Just having dinner with them [family]. I just want to be eating some good food around a table, holding my grandson, and just having a place. It doesn't matter what it is as long as I have a place to bring my family back together."

The day began with more than 15 Veterans not knowing where the day would lead; now one Veteran is looking forward to having his grandchild over for dinner, another is happy to have a room for his daughter when she visits, another is happy to be close to his job. All of them have keys to permanent housing with another successful Operation: REVEILLE in the books.