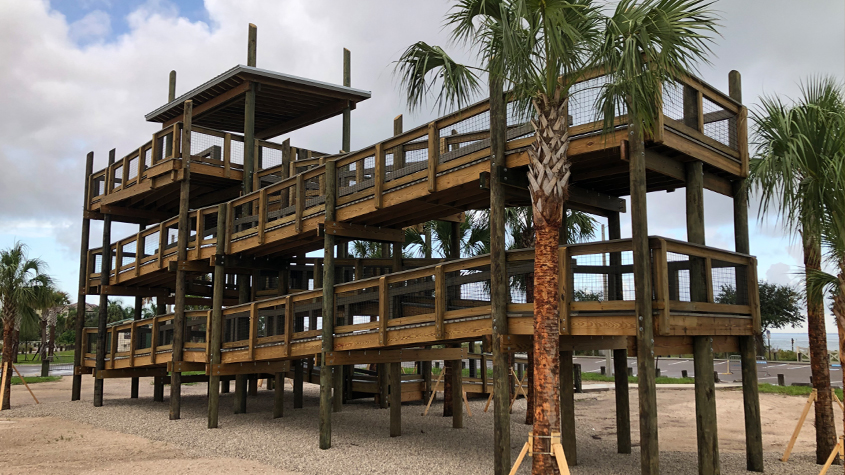 Positioned near the center of the Apollo Beach Nature Preserve, the structure soars 37 feet above an expanse of beach and native vegetation. Atop the tower, residents and visitors take in a watery vista sprinkled with islands, passing ships and pleasure boats, channel markers, and the downtowns of Tampa and St. Petersburg. Elsewhere there's the waterfront community of Apollo Beach and its signature water tower, and TECO's Big Bend power plant.

The tower's broad stance is the result of it being the first wheelchair-accessible structure of its kind in the Tampa Bay area. The ADA-compliant structure has wide ramps with modest grades that make it possible for anyone to take in the lofty spectacle.

The 63-acre preserve at the north end of Surfside Boulevard has a sandy beach, picnic pavilions, a restoration area, and a hiking trail, along with restrooms and parking. Swimming is prohibited because of swift offshore currents, but eight breakwaters protect and preserve the beach. It's a great place to fish, birdwatch, build a sandcastle, or fly a kite.

Years ago, before developers created the community of Apollo Beach in the 1950s, the area that's now the nature preserve was bay bottom. Hillsborough County and the Apollo Beach Waterway Improvement Group - local boaters who sought to deepen the community's channels - got together four years ago to enhance the manmade peninsula that serves as the preserve. The project was a win-win: deeper channels for boaters and a beach made of the dredged-out sand.

The observation tower is the final amenity scheduled for construction at the Apollo Beach Nature Preserve.

The nature preserve, at 6760 Surfside Blvd., is open during the daytime, seven days a week.