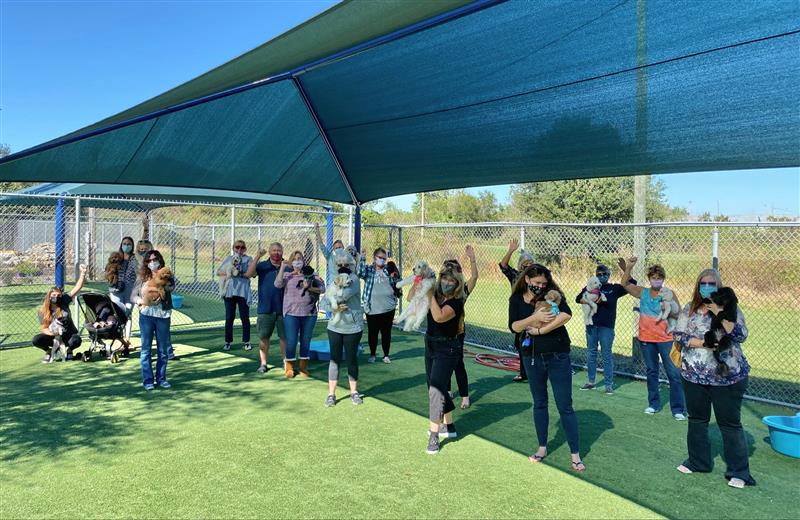 Puppy Mill Survivors Have Their Day at Reunion

The guests of honor wore fur.

The one-year anniversary of the "Diana Street dogs" adoptions took place Nov. 17 in a sun-splashed play area outside Hillsborough County's Pet Resource Center. Everyone in attendance, both two- and four-legged celebrants, had a fine time.

An unaware observer could not have imagined the story that preceded this happy ending.

One year ago, in November 2019, Pet Resources held a random drawing for people wishing to take home one of about 350 dogs that Hillsborough County rescued from a pet breeding outfit on Diana Street in East Tampa, where the animals were kept in unsanitary and unsafe conditions. A few dozen of the rescued dogs were nursing puppies or recovering from serious health conditions, and thus were not eligible for adoption at the time.

Demand for the pets - mostly poodles, terriers, Maltese, and shih tzus - was so great the County decided a mass adoption to pre-qualified owners was the best way to find homes for the animals. More than 1,000 people submitted applications for a chance to adopt one of the dogs, all of which were microchipped, vaccinated, registered, and spayed or neutered by Pet Resources.

The drawing was live-streamed, with Tampa Bay Buccaneers punter Bradley Pinion on hand to pull hopeful owners' names from a drum.

About 20 of the people whose names were drawn last year were invited to attend the Nov. 17 reunion with their adopted dogs. While the pets romped and sniffed, their owners conversed wearing face coverings and keeping a safe social distance from each other. There's talk of a larger reunion in the future, after the pandemic. But Pet Resources didn't want this anniversary to pass without notice. 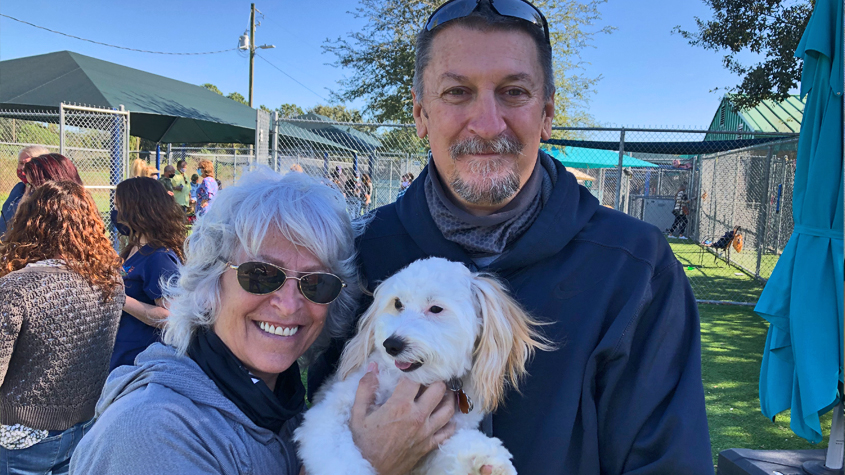 Renee and Robert Capano with their adopted dog Kobe.

Renee and Robert Capano, with their Chinese crested powderpuff/poodle Kobe, were among the first to arrive at the reunion. Kobe darted about the play area, greeting other dogs and their owners, chasing a ball, and playing tug with a toy. He responded to "sit" and "shake" commands from Renee, and seemed to thoroughly enjoy the outing. "He likes people. He likes dogs. He likes our two cats," Renee says.

In hindsight, the well-publicized adoptions one year ago were a resounding success. The once beleaguered dogs have adapted well to their new homes. The rescue and mass drawing shined a positive light on Pet Resources and the efforts of its staff and volunteers. And the incident drove home the importance of reporting abused pets.

"What you guys did is awesome," Renee says.

"Everything about Kobe just fit into our family. Everything."

Top photo: Healthy and playful, about 20 of the former "Diana Street dogs" frolicked outside the Pet Resource Center at a Nov. 17 reunion.