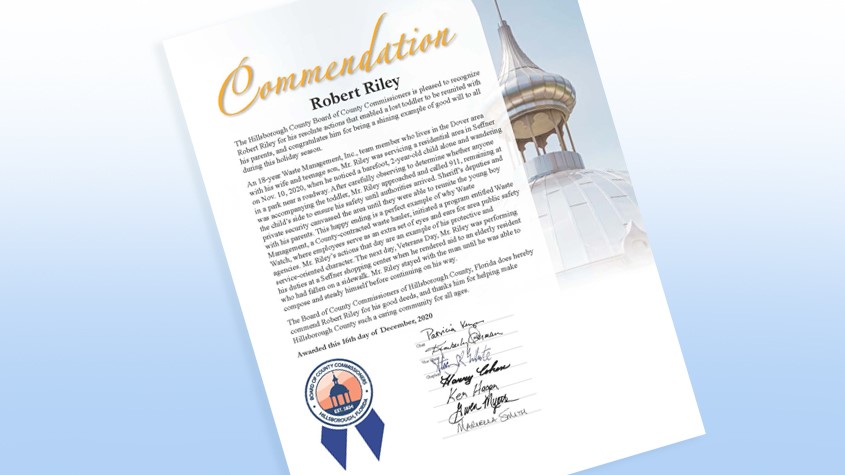 Board recognizes Waste Management, Inc., team member for his commitment to the community

During the Dec. 16 Hillsborough County Board of County Commissioners meeting, the Board presented a commendation to Robert Riley, a Dover resident whose quick thinking and generosity helped those in need.

While servicing a residential area in Seffner on Nov. 10, Riley noticed a barefoot, two-year-old child alone and wandering in a park near a roadway. While remaining with the child, he called 911, and when the Sheriff's deputies and private security arrived, they canvassed the area until they were able to reunite the young boy with his parents.

On Veterans Day, Riley's demonstrated an additional act of kindness when he rendered aid to an elderly resident who had fallen on a sidewalk. He stayed with the man until he was able to compose and steady himself before continuing on his way.

After the 18-year veteran thanked the Board for the recognition, District Manager Ken Bevis said that in the eyes of Waste Management, Inc. and the residents that needed help, Robert Riley is a hero.

"We very proud to have him as a teammate," Bevis said. "Our drivers are trained to observe and report, and only to intervene if it is safe to do so, as in the case with Rob and the wandering toddler."

The Board also presented a memoriam to the Rev. Dr. Cleo Phillip Epps in recognition of his accomplishments as pastor of Mount Olive Missionary Baptist Church.