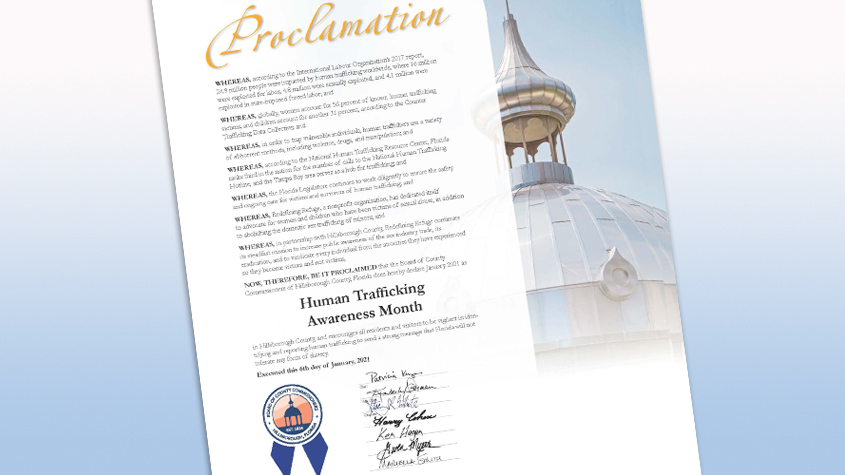 Board honors Redefining Refuge for helping survivors of exploitation, abuse

During the Jan. 6 Hillsborough County Board of County Commissioners meeting, the Board presented a proclamation declaring January as Human Trafficking Awareness Month. Natasha Nascimento, the chief executive officer of Redefining Refuge, Inc., accepted the recognition on behalf of numerous community partners who have worked tirelessly to help and protect survivors of human trafficking, which has impacted 24.9 million people worldwide, according to the International Labour Organization's 2017 report.

Since its founding 10 years ago, Redefining Refuge has dedicated itself to the advocacy of women and children who have been victims of sexual abuse. The nonprofit organization has partnered with Hillsborough County to increase public awareness of the sex industry trade and fight for its eradication.

"To me, this is not just a human trafficking proclamation, but it is [the County's] Emancipation Proclamation," she said. "It is a symbol of our commitment as a community to this cause, it is a symbol of our recognition of those that have been impacted by this, and it's also our way of saying that trafficking of children and young adults will not be tolerated in our community."