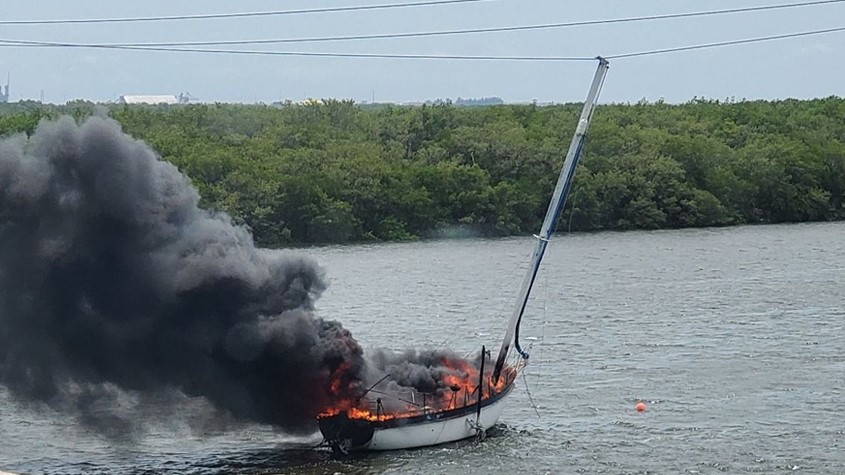 Watching a crew salvage his burned, sunken sailboat from the bottom of the Alafia River, Barry Mills says he's lucky to be alive.

He was aboard on April 15 when an anchor holding the seaworthy 37-foot Irwin sloop broke loose and the vessel rode an in-coming tide toward the U.S. 41 bridge. Working below deck, he was unaware Salty Hobo was adrift until moments before the tip of its 47-foot-high mask struck a 7,600-volt overhead power line. Mills scrambled into his dinghy as the boat exploded in flames.

The sailboat sank while firefighters doused the flames. It settled to the muddy bottom, coming to rest upright in about 11 feet of water, on the south side of the river's navigational channel. 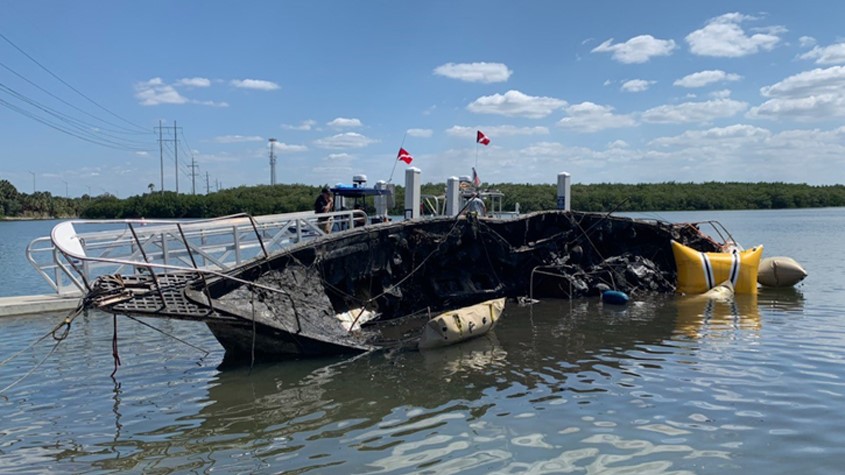 The 37-foot sloop was barely recognizable after salvagers raised it from the bottom of the Alafia River.

On April 28 a team of divers and support personnel raised the burned hull with inflatable bags, towed it to the close-by Williams Park Boat Ramp, and crushed it into disposable chunks. The coordinated effort involved Hillsborough and Tampa law enforcement officials and state Fish and Wildlife Conservation Commission officers.

Hillsborough County's Code Enforcement, Marine Safety Unit, and Conservation & Environmental Lands Management departments handled disposal operations. In addition to the sailboat the County has removed 25 vessels - sailboats, motor yachts, barges - from a boat "graveyard" adjacent to Williams Park and the Mosaic phosphate plant. Many of the vessels were half-sunken, stripped of valuables, and beyond repair.

The county has hired a salvage company to remove two large steel-hulled vessels from the location using state grants from boater registration fees.

Getting rid of the boats not only eliminates eyesores, it gets rid of potential hazards to navigation and possible environmental problems such as spilled fuel and wastewater. 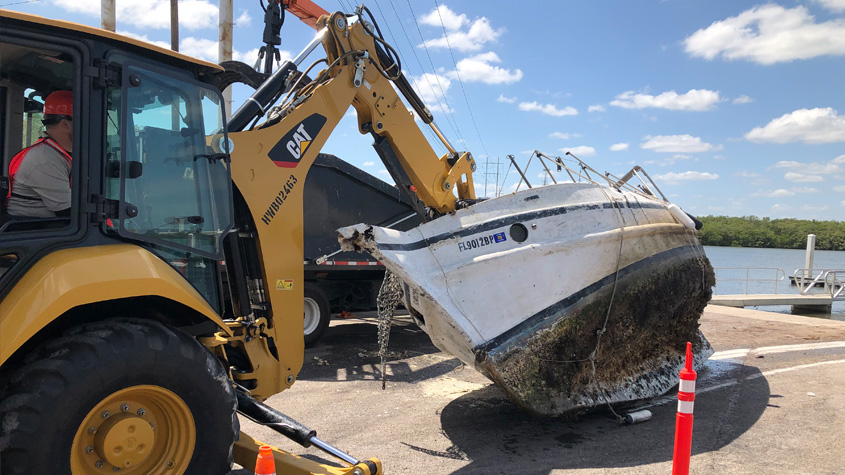 "Island Girl" is one of 25 derelict boats Hillsborough County removed from the Alafia River, near Williams Park..

While the interagency team was assembled to raise and haul away Salty Hobo, it also removed Island Girl, a dilapidated sailboat. A front-end loader pushed the listing craft off a beach, and the Marine Safety Unit towed it to the ramp, where it was dismantled and sent to a landfill. Metal parts, such as the mast and railings, will be recycled. Authorities also properly dispose of any fuel, rubber, engine parts, and other potentially hazardous materials they come across.

Photo: Salty Hobo burns after the tip of its mast strikes a power line on April 15. Photo provided by Josean Torres.