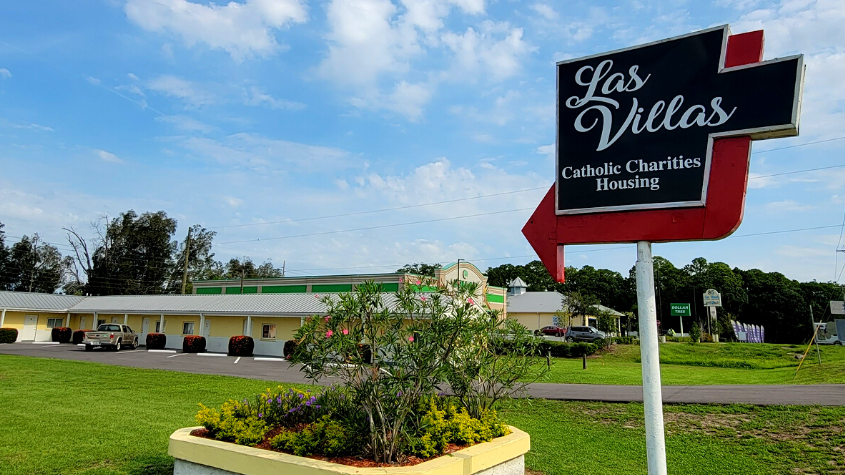 With rent and home prices rapidly rising across Florida and the nation, governments, nonprofits, and housing advocates are finding creative solutions for affordable housing. One of those innovations is located directly off U.S. 41 in Ruskin, thanks to Catholic Charities. Las Villas Apartments, formerly known as the Carol Motel, recently underwent a $2 million rehabilitation, turning an old motel that was wasting away on the side of the road into a newly renovated apartment complex.

From upgraded efficiency kitchens and new flooring in each unit, to plumbing improvements and a new HVAC system for the entire complex, the Las Villas Apartments are now being rented to low-income residents at below-market rates, including Casimiro "Cass" Garcia. But it isn't Garcia's first time calling the complex home. He previously called Carol Motel home before it went into disrepair.

"I lived in Room 6 for five years after I moved around for a while," Garcia said. "I helped the owners out as much as I could, but it became too much for the owners to handle because everything was old and started falling apart."

The former owners tried to save the motel, which was family-owned since the 1970s, but they knew it was time for them to sell. That's where Catholic Charities and Rogers came in, acquiring the property with $1.5 million in funding from Hillsborough County and $500,000 from Catholic Charities of the Diocese of St. Petersburg.

"We can't do it alone," Rogers said during the official ribbon cutting and blessing of Las Villas. "We are blessed with wonderful partnerships, and in particular with Hillsborough County leadership, for their faith in our ability to provide quality affordable housing to those in need in Hillsborough County."

Change for the Better

After the renovations were completed, Catholic Charities immediately called Garcia to ask if he wanted to move back into the complex. When he moved back in, it wasn't like how he last left it.

"Everything is incredible! Because before everything was so bad, and now everything is new. From the plumbing to the floors, there aren't any more problems like before," Garcia said. "It's a lot of change, but it's change for the better."

Now Garcia doesn't have to worry about helping the current owners take care of the complex. They are there to take care of him. "Anything I need, I know I can call them [Catholic Charities], and they are here for me."