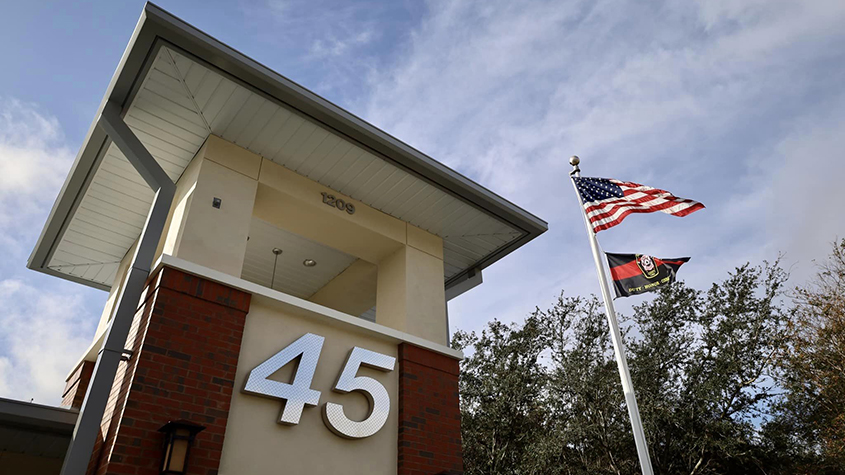 Brandon is booming. A community of over 116,000 residents and hundreds of businesses now has a new, modern fire station calling Central Brandon home.

On Jan. 4, 2023, Hillsborough County commissioners, the county administrator, the chief of Hillsborough Fire Rescue, and Brandon community leaders ushered in the new station with a Ribbon-Cutting Ceremony. This was the second ribbon cutting of the year. Relocated Station 29 in Apollo Beach was celebrated the day before.

For decades, Brandon, the state's largest unincorporated community, had one fire station to respond to emergencies, putting a strain on nearby stations and impacting response times.

In 2019, however, Hillsborough County Fire Rescue's (HCFR) Capital Facilities Master Plan was updated. It called for 24 additional fire stations to meet the rapidly growing demands of Hillsborough. Given the need in Central Brandon, Fire Station 45 was at the top of the list.

For over two years, Station 45 personnel and apparatus served the community from a modular unit nearby. County administration saw the need for service was too great to wait until the station could be completed.

Station 45 is the first new HCFR station added since the department's master plan was approved. Since staffing the new station, the engine at Station 45 has become among the five busiest trucks in Fire Rescue's fleet.

Home to a fire engine, an ambulance, and five firefighters per shift, Station 45 operates 24 hours a day, seven days a week, in three shifts.

The new stations contain specialized washing machines to remove particulate matter from protective equipment. Separate showers allow first responders to rid themselves of contaminants before such toxic substances can be introduced into the living spaces of the stations or their homes.

The need for social distancing, as reinforced during the COVID-19 pandemic, has driven the need to incorporate individualized sleeping quarter designs into these new facilities to allow this practice, when needed, to reduce the spread of airborne illnesses.

The Need for More

"The Master Plan calls for 24 new stations to keep pace with the growth of our county. These are the first two; we have 22 more to go," stated Fire Chief Dennis Jones, who looks forward to more stations and first responders to answer the critical needs of Hillsborough County residents.